Home » Electronics World » What is a Soldering Iron? (All You Need to Know)

What is a Soldering Iron? (All You Need to Know) 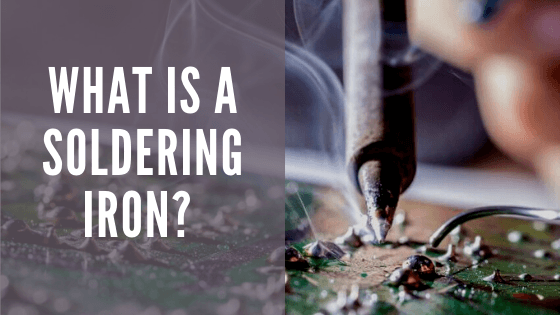 If you are an electric engineer or hobbyist who loves doing DIY project then soldering is a must have skill and for that you need to know how to use a soldering iron kit properly.  It is a skill which comes with some careful practice and soldering is a form of art which geeks really appreciate.

In this guide we will help you understand what’s soldering, what are the different types of soldering iron and the right practice that should be adopted in order to become a pro at soldering. We shall also explore and touch upon desoldering. Keep reading!

To put it in very simple terms, soldering is a process of joining two or more electronic components together by melting solder at the place of connection. Now you might wonder what’s a solder, well Solder is a metal alloy which when it cools down creates a strong electrical bond between the electronic parts. However the advantage of using a solder is that, even though joint made is strong but it can be reversed if required using a process known as desoldering.

As the name suggest it is the one responsible to supply heat which melts the solder in its place. It consists of a tip (different designs are available depending on the application) and a insulation handle from where you hold the iron.

As mentioned above a solder is a substance which when heated melts but hardens when it cools down. It generally comes it a wire form made from the allow made of tin & lead or tin & copper. However due to safety and environmental concerns lead based alloys are discouraged. A substance called Flux is also sometimes used to get ride of oxide layers on metal parts which helps the solder to bond better with the metal parts.

It might sound a bit silly but a conventional songe can come very handy and useful during soldering. It’s generally used to clean the tip of the soldering iron to remove the oxidation which forms during the soldering process.

A stand is generally required to keep the iron safely when not in use. If we keep the iron without a stand there is a chance for the hot iron to come in contact of a flammable material or can also cause accidental injury to your hand.

Though not very necessary, it can sometime come in very handy which can help you to hold the items in place so that its easier for you to solder. It consists of 2 or more alligator clips and sometimes also comes with magnifying glass to help you focus on the work area.

Last but not the least and probably one of the most important item that one must have: safety glasses. A protective eye wear is generally recommended in case there is any accidental splash of hot solder which could be potentially harmful. Also it highly recommended that you soldering in an area which is well ventilated since fumes are released during the soldering process. In some cases fume extraction equipments ae also used which helps to extract fume from air to reduce health and safety risks.

These types of electric soldering iron is most preferred by the beginners and is probably one of the best go to option for an unexperienced person. It is a normal plug and play soldering iron which when plugged into an electrical socket heats up. They are cheap but yet effective and can be easily replaced when it breaks down.