How ships survive through massive storms? 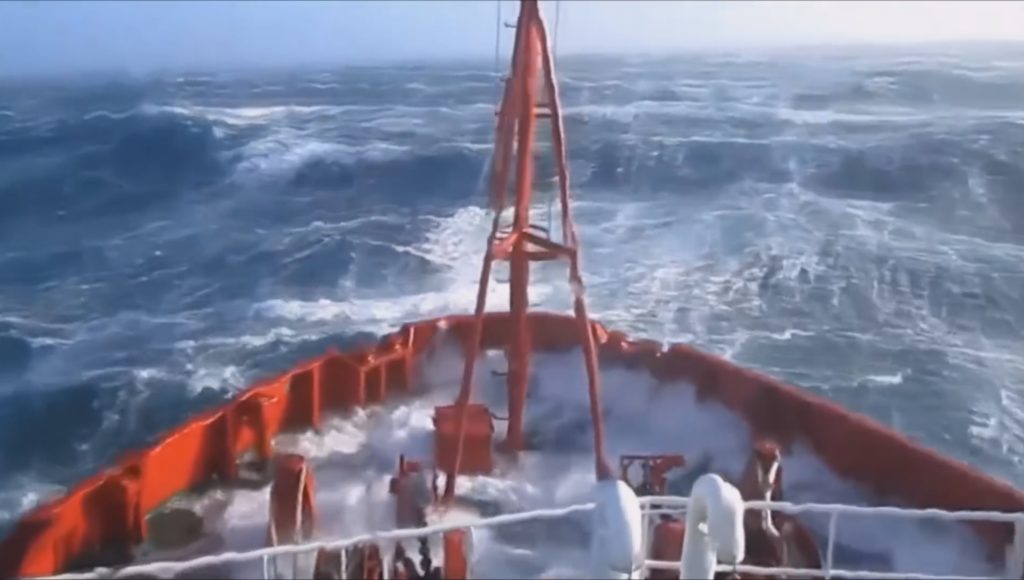 Huge walls of water which are driven by very powerful winds slams into ships wherever they are on the sea. A major storm can batter even the largest and toughest vessel which is an avoidable part of life on water.

Even though modern cargo ships are designed for rough and tough weather, hurricanes in the sea are some of the most dangerous storms on the ocean a ship can face.  The most dangerous ship in a hurricane is an empty one. That's because the weight of cargo helps stabilize the ship against the waves. Ballast provides a little stabilizing weight when ships sail empty, but not always enough.

Ships nowadays are constructed of thick steel, but if the waves are large and powerful and their battering lasts long enough, the pounding of those waves can still beak a ship apart.To win this battle with the sea depends on how well a ship is maintained, a trained and experience crew and some beautiful engineering design of the ship.

So in order to further understand this we need to learn about Naval Engineering.

Naval architecture, or naval engineering, along with automotive engineering and aerospace engineering, is an engineering discipline branch of vehicle engineering, incorporating elements of mechanical, electrical, electronic, software and safety engineering as applied to the engineering design process, shipbuilding, maintenance, and operation of marine vessels and structures. Naval architecture involves basic and applied research, design, development, design evaluation (classification) and calculations during all stages of the life of a marine vehicle. Preliminary design of the vessel, its detailed design, construction, trials, operation and maintenance, launching and dry-docking are the main activities involved. Ship design calculations are also required for ships being modified (by means of conversion, rebuilding, modernization, or repair). Naval architecture also involves formulation of safety regulations and damage-control rules and the approval and certification of ship designs to meet statutory and non-statutory requirements.

Hydrostatics concerns the conditions to which the vessel is subjected while at rest in water and to its ability to remain afloat. This involves computing buoyancy, displacement, and other hydrostatic properties such as trim (the measure of the longitudinal inclination of the vessel) and stability (the ability of a vessel to restore itself to an upright position after being inclined by wind, sea, or loading conditions) 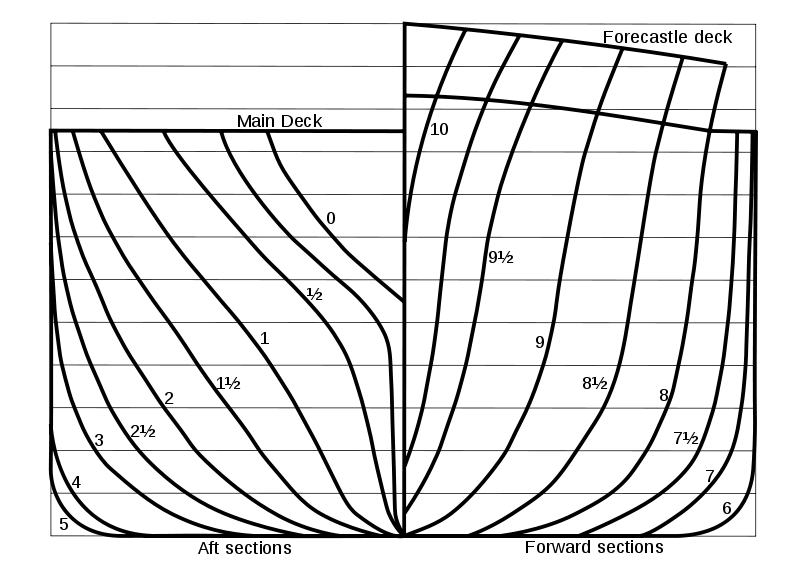 Hydrodynamics concerns the flow of water around the ship's hull, bow, and stern, and over bodies such as propeller blades or rudder, or through thruster tunnels. Resistance – resistance towards motion in water primarily caused due to flow of water around the hull. Powering calculation is done based on this. Propulsion – to move the vessel through water using propellers, thrusters, water jets, sails etc. Engine types are mainly internal combustion. Some vessels are electrically powered using nuclear or solar energy. Ship motions – involves motions of the vessel in seaway and its responses in waves and wind. Controllability (maneuvering) – involves controlling and maintaining position and direction of the vessel.

While atop a liquid surface a floating body has 6 degrees of freedom in its movements, these are categorized in either rotation or translation.

- Rotation about a transverse axis is termed trim or pitch.

- Rotation about a fore and aft axis is termed heel or roll.

- Rotation about a vertical axis is termed yaw.

While a body floats on a liquid surface it still encounters the force of gravity pushing down on it. In order to stay afloat and avoid sinking there is an opposed force acting against the body known as the hydrostatic pressures. The forces acting on the body must be of the same magnitude and same line of motion in order to maintain the body at equilibrium. This description of equilibrium is only present when a freely floating body is in still water, when other conditions are present the magnitude of which these forces shifts drastically creating the swaying motion of the body.

The stability of a ship under most conditions is able to overcome any form or restriction or resistance encountered in rough seas; however, ships have undesirable roll characteristics when the balance of oscillations in roll is two times that of oscillations in heave, thus causing the ship to capsize.

Structures involves selection of material of construction, structural analysis of global and local strength of the vessel, vibration of the structural components and structural responses of the vessel during motions in seaway. Depending on the type of ship, the structure and design will vary in what material to use as well as how much of it. Some ships are made from glass reinforced plastics but the vast majority are steel with possibly some aluminium in the superstructure. The complete structure of the ship is designed with panels shaped in a rectangular form consisting of steel plating supported on four edges. Combined in a large surface area the Grillages create the hull of the ship, deck, and bulkheads while still providing mutual support of the frames. Though the structure of the ship is sturdy enough to hold itself together the main force it has to overcome is longitudinal bending creating a strain against its hull, its structure must be designed so that the material is disposed as much forward and aft as possible. 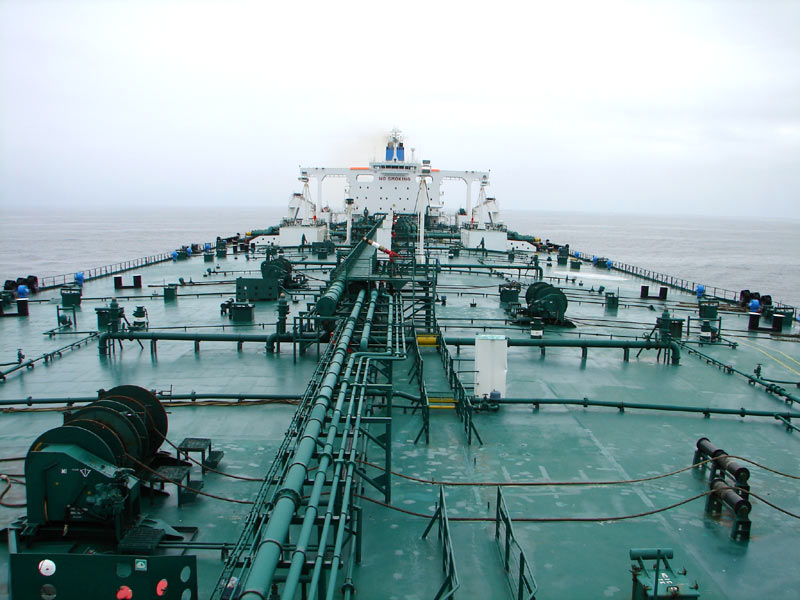 The principal longitudinal elements are the deck, shell plating, inner bottom all of which are in the form of grillages, and additional longitudinal stretching to these. The dimensions of the ship are in order to create enough spacing between the stiffeners in prevention of buckling. Warships have used a longitudinal system of stiffening that many modern commercial vessels have adopted. This system was widely used in early merchant ships such as the SS Great Eastern, but later shifted to transversely framed structure another concept in ship hull design that proved more practical. This system was later implemented on modern vessels such as tankers because of its popularity and was then named the Isherwood system. The arrangement of the Isherwood system consists of stiffening decks both side and bottom by longitudinal members, they are separated enough so they have the same distance between them as the frames and beams. This system works by spacing out the transverse members that support the longitudinal by about 3 or 4 meters, with the wide spacing this causes the traverse strength needed by displacing the amount of force the bulkheads provide.

Construction depends on the material used. When steel or aluminium is used this involves welding of the plates and profiles after rolling, marking, cutting and bending as per the structural design drawings or models, followed by erection and launching. Other joining techniques are used for other materials like fibre reinforced plastic and glass-reinforced plastic.The process of construction is thought-out cautiously while considering all factors like safety, strength of structure, hydrodynamics, and ship arrangement. Each factor considered presents a new option for materials to consider as well as ship orientation. When the strength of the structure is considered the acts of ship collision are considered in the way that the ships structure is altered. Therefore, the properties of materials are considered carefully as applied material on the struck ship has elastic properties, the energy absorbed by the ship being struck is then deflected in the opposite direction, so both ships go through the process of rebounding to prevent further damage.

Traditionally, naval architecture has been more craft than science. The suitability of a vessel's shape was judged by looking at a half-model of a vessel or a prototype. Ungainly shapes or abrupt transitions were frowned on as being flawed. This included rigging, deck arrangements, and even fixtures. Subjective descriptors such as ungainly, full, and fine were used as a substitute for the more precise terms used today. A vessel was, and still is described as having a ‘fair’ shape. The term ‘fair’ is meant to denote not only a smooth transition from fore to aft but also a shape that was ‘right.’ Determining what is ‘right’ in a particular situation in the absence of definitive supporting analysis encompasses the art of naval architecture to this day.

Modern low-cost digital computers and dedicated software, combined with extensive research to correlate full-scale, towing tank and computational data, have enabled naval architects to more accurately predict the performance of a marine vehicle. These tools are used for static stability (intact and damaged), dynamic stability, resistance, powering, hull development, structural analysis, green water modelling, and slamming analysis. Data are regularly shared in international conferences sponsored by RINA, Society of Naval Architects and Marine Engineers (SNAME) and others. Computational Fluid Dynamics is being applied to predict the response of a floating body in a random sea.

Due to the complexity associated with operating in a marine environment, naval architecture is a co-operative effort between groups of technically skilled individuals who are specialists in particular fields, often coordinated by a lead naval architect. This inherent complexity also means that the analytical tools available are much less evolved than those for designing aircraft, cars and even spacecraft. This is due primarily to the paucity of data on the environment the marine vehicle is required to work in and the complexity of the interaction of waves and wind on a marine structure.

A naval architect is an engineer who is responsible for the design, classification, survey, construction, and/or repair of ships, boats, other marine vessels, and offshore structures, both commercial and military, including: 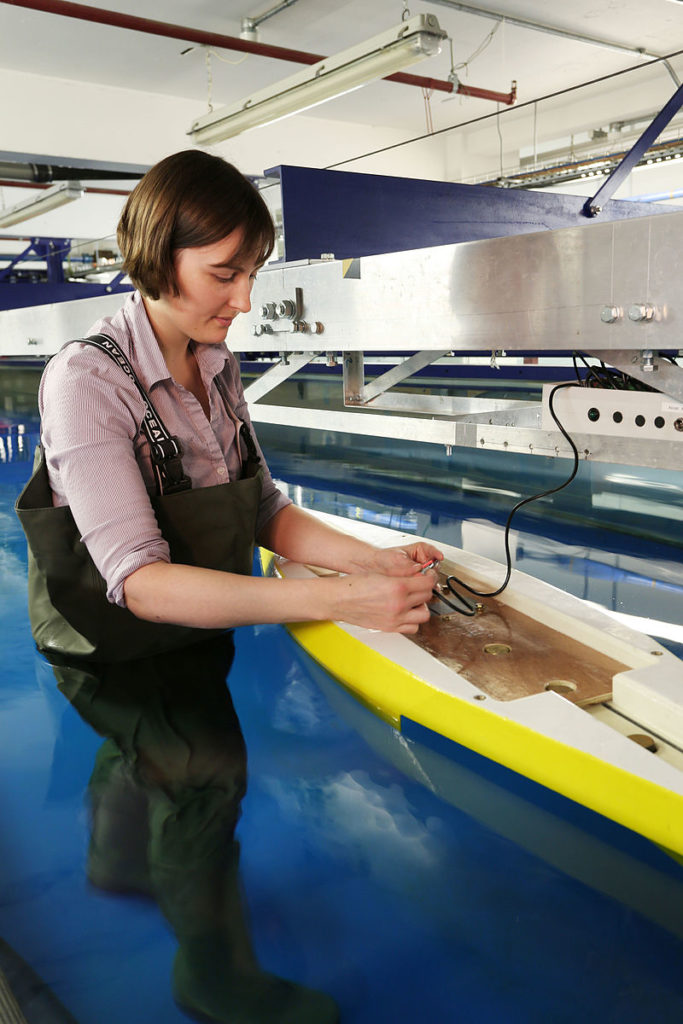 Some of these vessels are amongst the largest (such as supertankers), most complex (such as Aircraft carriers), and highly valued movable structures produced by mankind. They are typically the most efficient method of transporting the world's raw materials and products. Modern engineering on this scale is essentially a team activity conducted by specialists in their respective fields and disciplines. Naval architects integrate these activities. This demanding leadership role requires managerial qualities and the ability to bring together the often-conflicting demands of the various design constraints to produce a product which is fit for the purpose.

In addition to this leadership role, a naval architect also has a specialist function in ensuring that a safe, economic, environmentally sound and seaworthy design is produced. To undertake all these tasks, a naval architect must have an understanding of many branches of engineering and must be in the forefront of high technology areas. He or she must be able to effectively utilize the services provided by scientists, lawyers, accountants, and business people of many kinds.