Home » Civil World » 6 Most Dangerous Railway Routes In The World!

6 Most Dangerous Railway Track In The World

Here are the 6 most dangerous railway track from around the world which are just marvelous piece of architecture. These routes are used by various railroad companies and are either used for carrying passengers or used as railway freight. 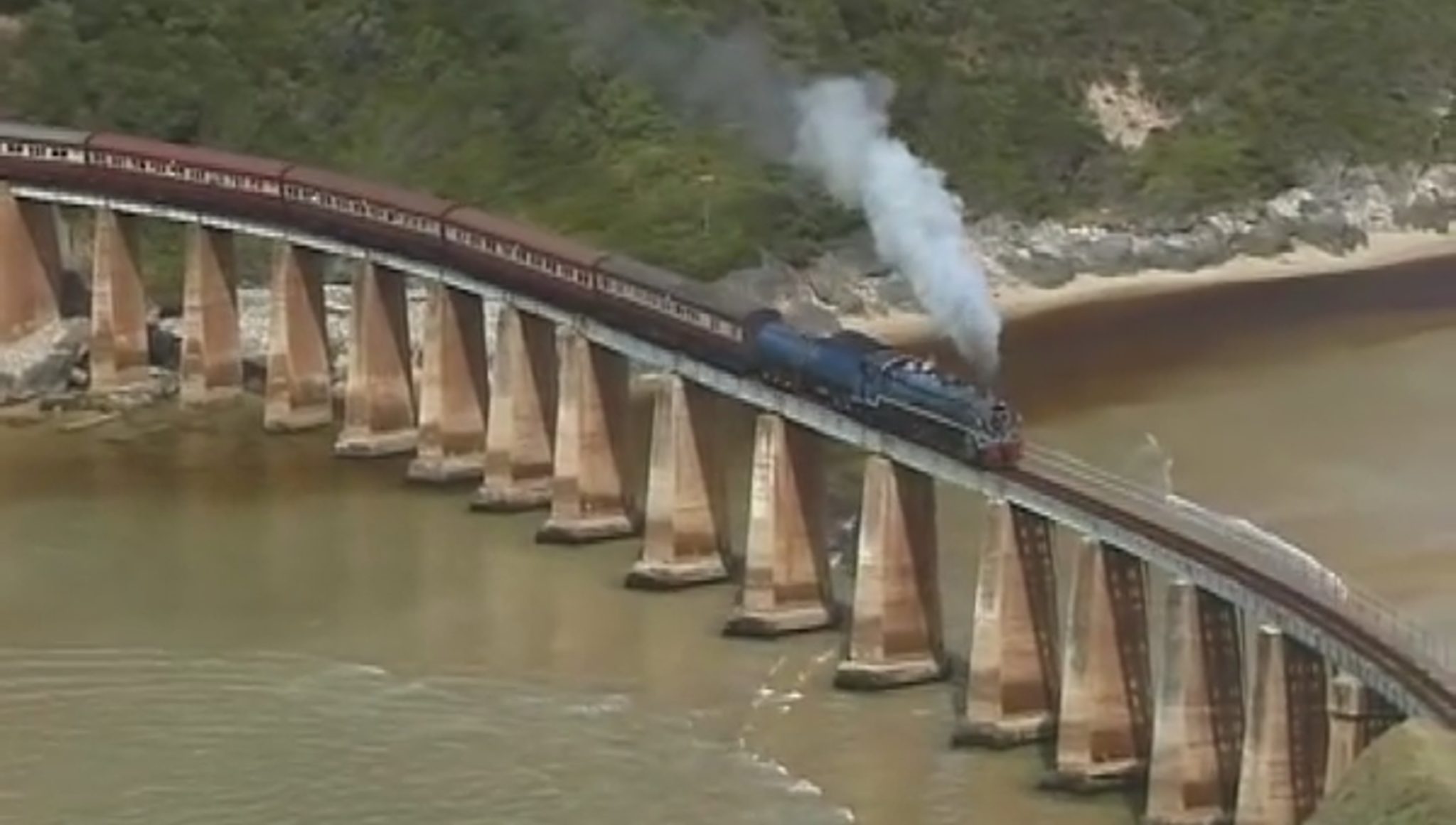 The Outeniqua Choo Tjoe railway routes was the last remaining continually-operated passenger steam train in Africa, ending operation in June 2009. The railway was completed in 1928, and links the towns of George and Knysna in the Western Cape, South Africa. The 3 hour journey also stops in the towns of Wilderness, Goukamma, and Sedgefield. The scenic 67-kilometre (42 mi) route hugs the rugged coastline of the Garden Route before ending by crossing a bridge over the lagoon in Knysna. The railroad company based in South Africa operates on this routes.

The Takamori Line  is Japanese railway routes in Kumamoto Prefecture, between Tateno Station, Minamiaso, and Takamori Station, Takamori. This is the only railway line Minamiaso Railway operates. As the company name suggests, the line traverses the south part of Mount Aso caldera. The line has two stations with very long names, namely Minamiaso Mizu-no-Umareru-Sato Hakusui-Kōgen Station and Aso-Shimodajō-Fureai-Onsen Station, the former being the longest in Japan.The railroad company based in Japan operates on this routes. 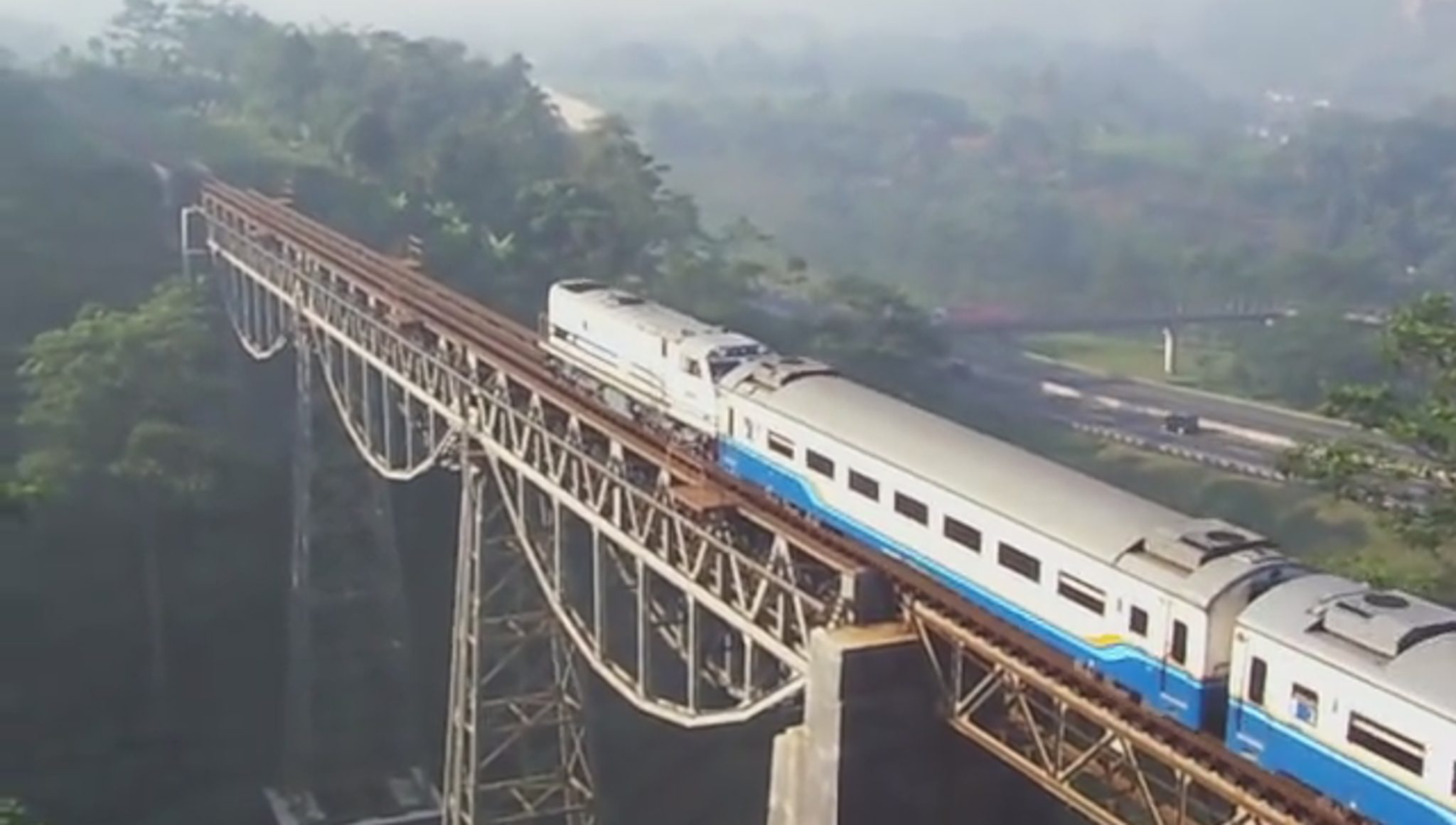 Cikubang Bridge is a railway bridge connecting the city of Bandung with the city of Jakarta. This bridge is located in Padalarang , West Bandung regency , West Java . This bridge has four steel pillars weighing about 110 tons. Cikubang Bridge is the longest railway bridge in Indonesia with a length of 300 meters. Cikubang Bridge began to be used since 1906 and still stands still with a height of 80 meters from the bottom of the river Cikubang. The construction of this bridge relates to the construction of the Cikampek - Purwakarta - Bandung railway line which began between 1881 - 1884 by the Staats Spoorwegen (SS) railway company.The railroad company based in Indonesia operates on this routes.

The addition of a bridge structure with a semi-circular metal arch along the tracks at the bottom of the bearing was carried out in 1953 . The reinforcement is in line with the start of diesel locomotives. Cikubang bridge is clearly visible from the highway between Plered and Padalarang, often making tourists stop for a moment to watch the train that passes on the bridge. 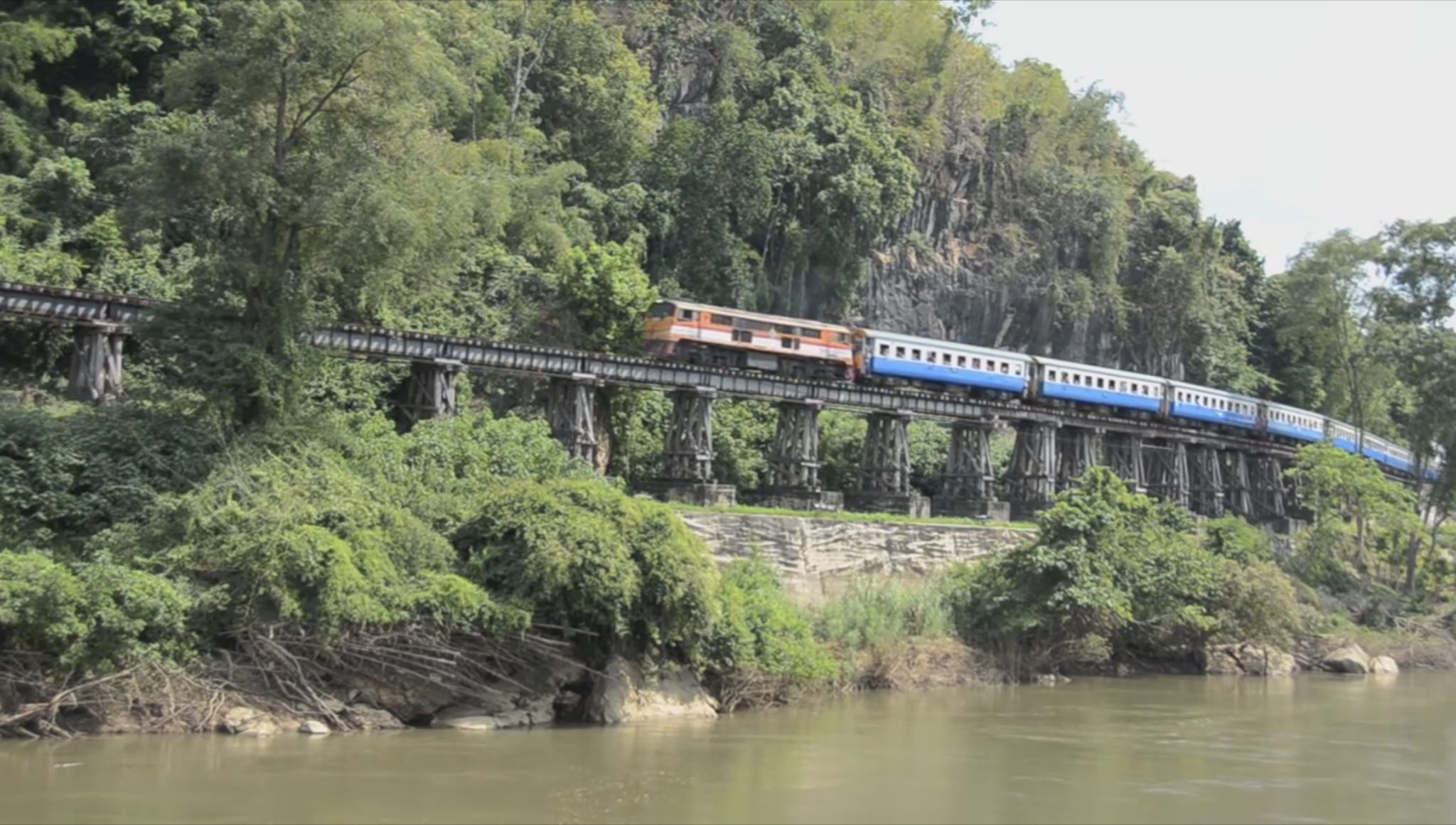 The Burma Railway, also known as the Death Railway, the Burma–Siam Railway, the Thailand–Burma Railway and similar names, was a 415-kilometre (258 mi) railway between Ban Pong, Thailand, and Thanbyuzayat, Burma, built by the Empire of Japan in 1943 to support its forces in the Burma campaign of World War II. This railway completed the railway routes between Bangkok, Thailand and Rangoon, Burma (now Yangon). The line was closed in 1947, but the section between Nong Pla Duk and Nam Tok was reopened ten years later in 1957.The railroad company based in Thailand operates on this routes.

Forced labour was used in its construction. More than 180,000—possibly many more—Southeast Asian civilian labourers (Romusha) and 60,000 Allied prisoners of war (POWs) worked on the railway. Javanese, Malayan Tamils of Indian origin, Burmese, Chinese, Thai and other Southeast Asians, forcibly drafted by the Imperial Japanese Army to work on the railway, died in its construction. 12,621 Allied POWs died during the construction. The dead POWs included 6,904 British personnel, 2,802 Australians, 2,782 Dutch, and 133 Americans.

Pamban Bridge is a railway bridge which connects the town of Rameswaram on Pamban Island to mainland India. Opened on 24 February 1914, it was India's first sea bridge, and was the longest sea bridge in India until the opening of the Bandra-Worli Sea Link in 2010. The rail bridge is, for the most part, a conventional bridge resting on concrete piers, but has a double-leaf bascule section midway, which can be raised to let ships and barges pass through. Till 1988, the Pamban bridge was the only surface transport that connected Tamil Nadu's island of Rameswaram to the mainland.The railroad company based in India operates on this routes.

In 1988, a road bridge was also constructed parallel to the rail bridge. This road bridge is also known as Annai Indira Gandhi Road Bridge. The Pamban Road Bridge connects the National Highway (NH 49) with the Rameswaram island. It stands on the palk strait and between the shores of Mandapam (Place on the Indian Main land) and Pamban (One of the fishermen town in Rameswaram island). It was inaugurated by former Indian Prime Minister Rajiv Gandhi On the date of October 2, 1988. This 2.345 km long Bridge took close to 14 years to be completed. 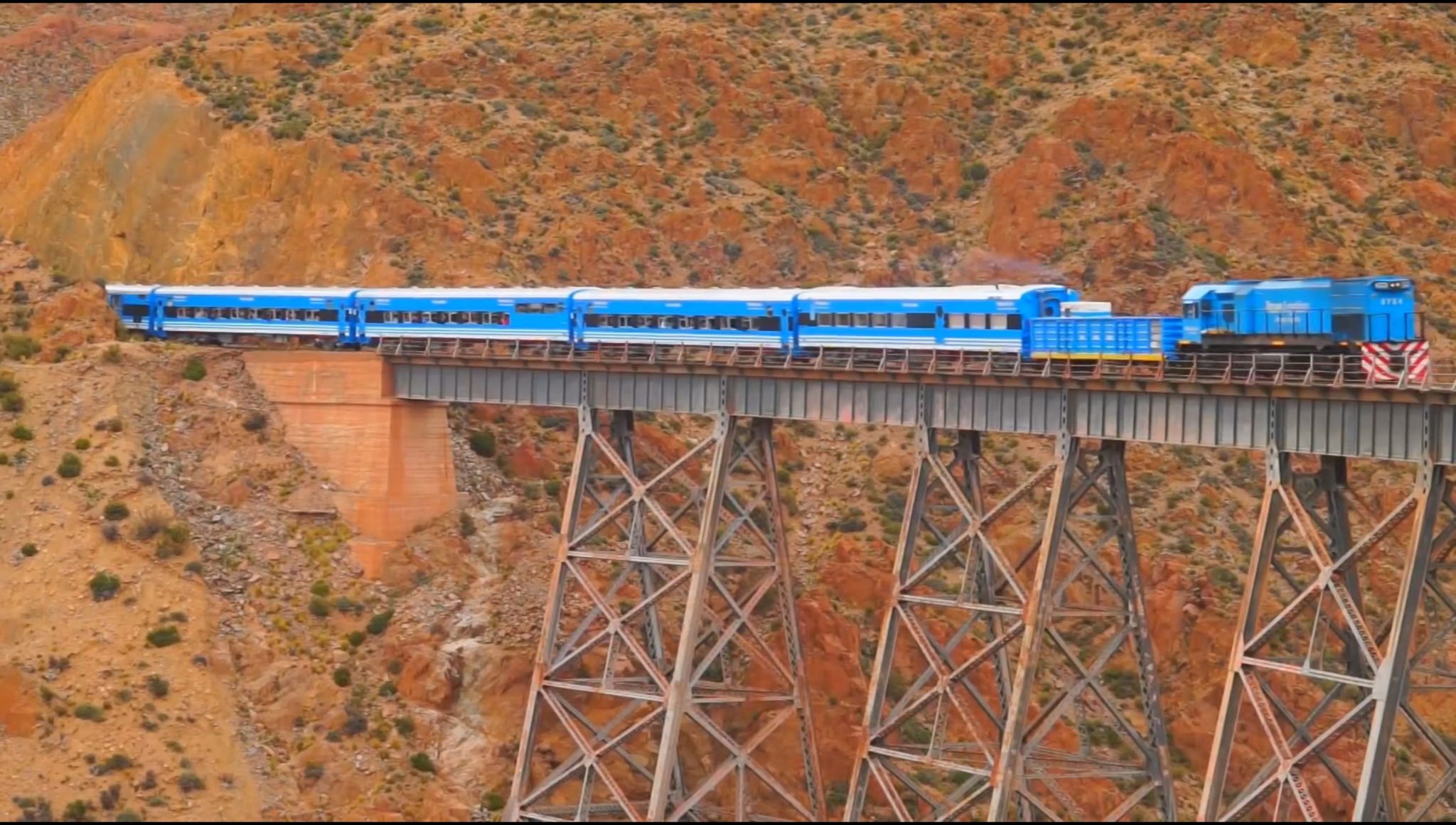 The Tren a las Nubes (English: Train to the Clouds) is a tourist train service in Salta Province, Argentina. The service runs along the eastern part of the Salta–Antofagasta railway line of the Belgrano Railway (also known as the "C-14" line) that connects the Argentine Northwest with the Chilean border in the Andes mountain range, over 4,220 metres (13,850 ft) above mean sea level, the fifth highest railway in the world. Originally these railway routes were built for economic and social reasons, it is now primarily of interest to tourists as a heritage railway, though cheaper tickets are also available for locals to use the train as transport.The railroad company based in Argentina operates on this routes.