Home » Aviation World » What Did We Find on Mars? | New Images from Mars Curiosity Rover

What did we find on Mars?

It’s been more than 2700 days since the Mars Curiosity Rover landed on the surface of Mars with the goal to study about the Martian climate and more importantly to do an assessment if Mars offered environmental conditions favorable for microbial life including investigation of the role of water; and planetary habitability studies in preparation for human exploration. But the question is what we have actually found in the last 2648 Martian days.

Though at first glance it might look like a wet land with water in the background but unfortunately that’s not the case. The picture taken by the Curiosity Mars rover on the 1589th Martian day shows redder rocks in the foreground which resembles the Murray formation. The pale gray rocks in the on the right half of the image shows the clay unit and a band between those terrains is called Vera Rubin Ridge named after Vera Cooper Rubin whose astronomical observations provided important evidence for the existence of the universe's dark matter.

It is interesting to note that the panorama has been white-balanced so that the colours of the rock and sand materials resemble how they would appear under daytime lighting conditions on Earth. 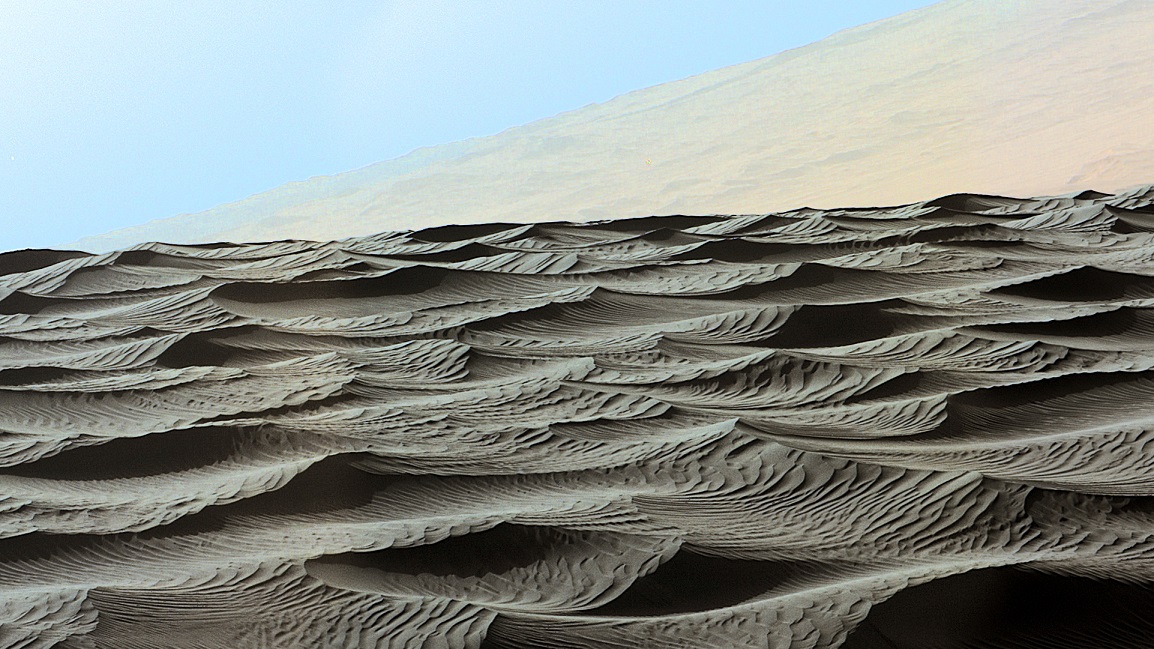 This looks like a picture from the great Sahara desert but it was clicked by the Curiosity rover on the 1192nd Martian day from a location which is named as Bagnold Dune Field. As seen from the image the sand dunes and the smaller type of ripples looks very similar to the one found on earth but the larger ripples which are roughly 10 feet apart are a type which is not seen on Earth.

The image is presented with a colour adjustment to resemble how the sand would look like in daytime lighting on earth. The sand is actually very dark due to the morning shadows and also because of the intrinsic darkness of the minerals which dominates its composition. 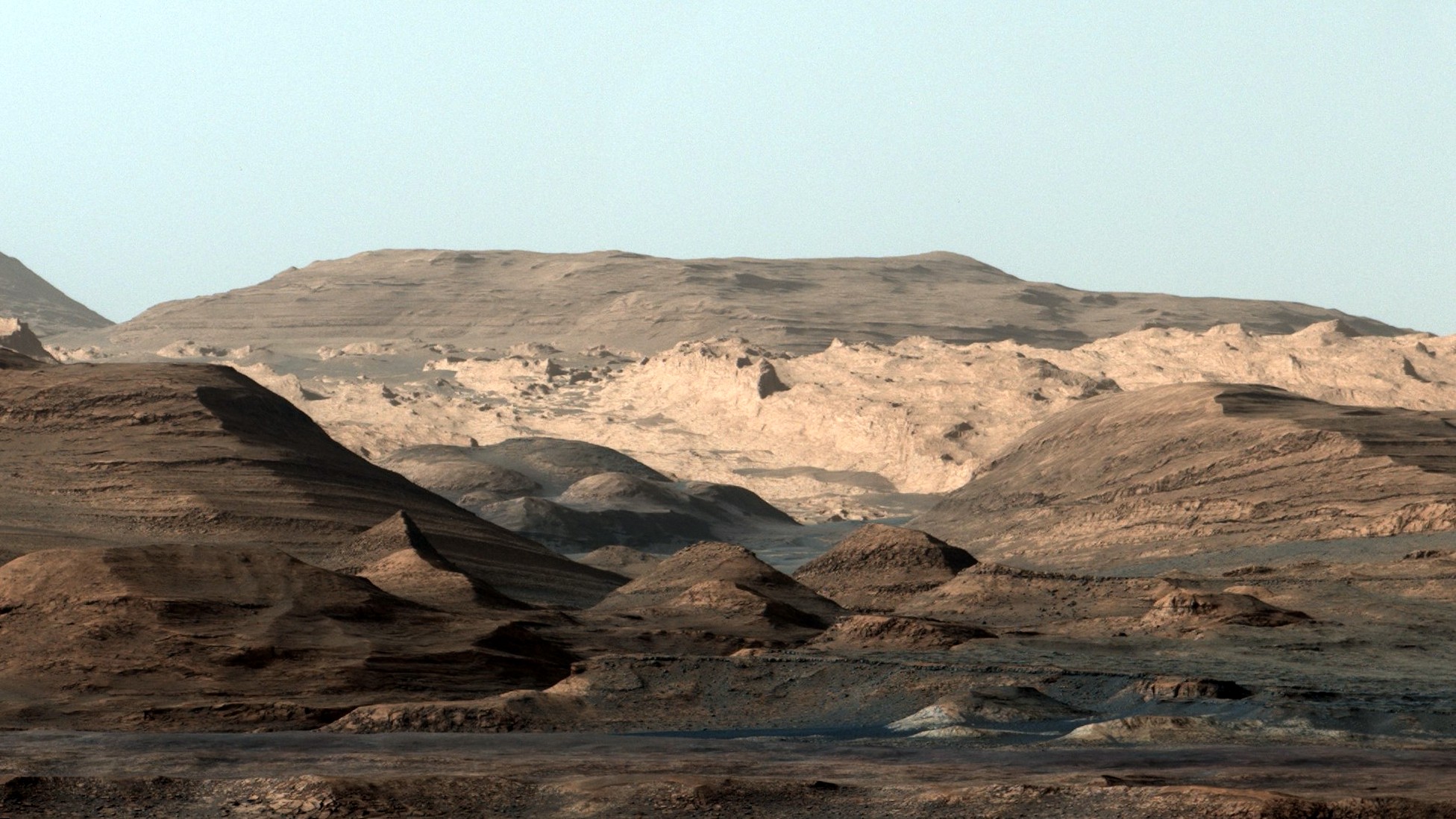 This picture was taken by the Curiosity Rover on September 9, 2015 which looks very similar to the mountain ranges on Earth but it’s actually a long ridge teeming with iron oxide. Beyond which is an undulating plain rich in clay minerals. And just beyond that are a multitude of rounded buttes, all high in sulphate minerals. Further behind in the image we can observe striking light toned cliffs in rock which could have formed in drier times and are now heavily eroded by winds.

The changing layers of mineralogy in this area of Mount Sharp suggests a changing environment in early Mars, though all involve exposure to water billions of years ago. The Curiosity team hopes to be able to explore these diverse areas in the months and years ahead. 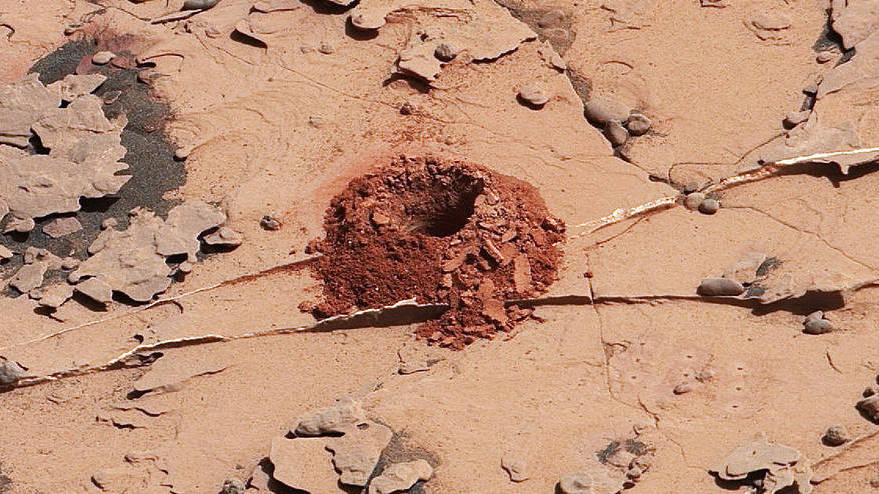 Though at first glance it might look like an enormous anthill but it’s actually a close-up image of a 2-inch hole made by the Mars Curiosity Rover on the 2057th Martian day. The image was taken using the Mast Camera and the image was further white balanced and contrast-enhanced. During this operation the rover collected the first rock sample.

This hole was made using a new drilling technique called the Feed Extended Drilling (FED). In this technique the drill’s bit is extended out past two stabilizer posts that were originally used to steady the drill against the Martian rocks. This enables Curiosity drill using the force of its robotic arm, a little more like a human would while drilling into a wall at home.

During this operation the rover collected the first rock sample. 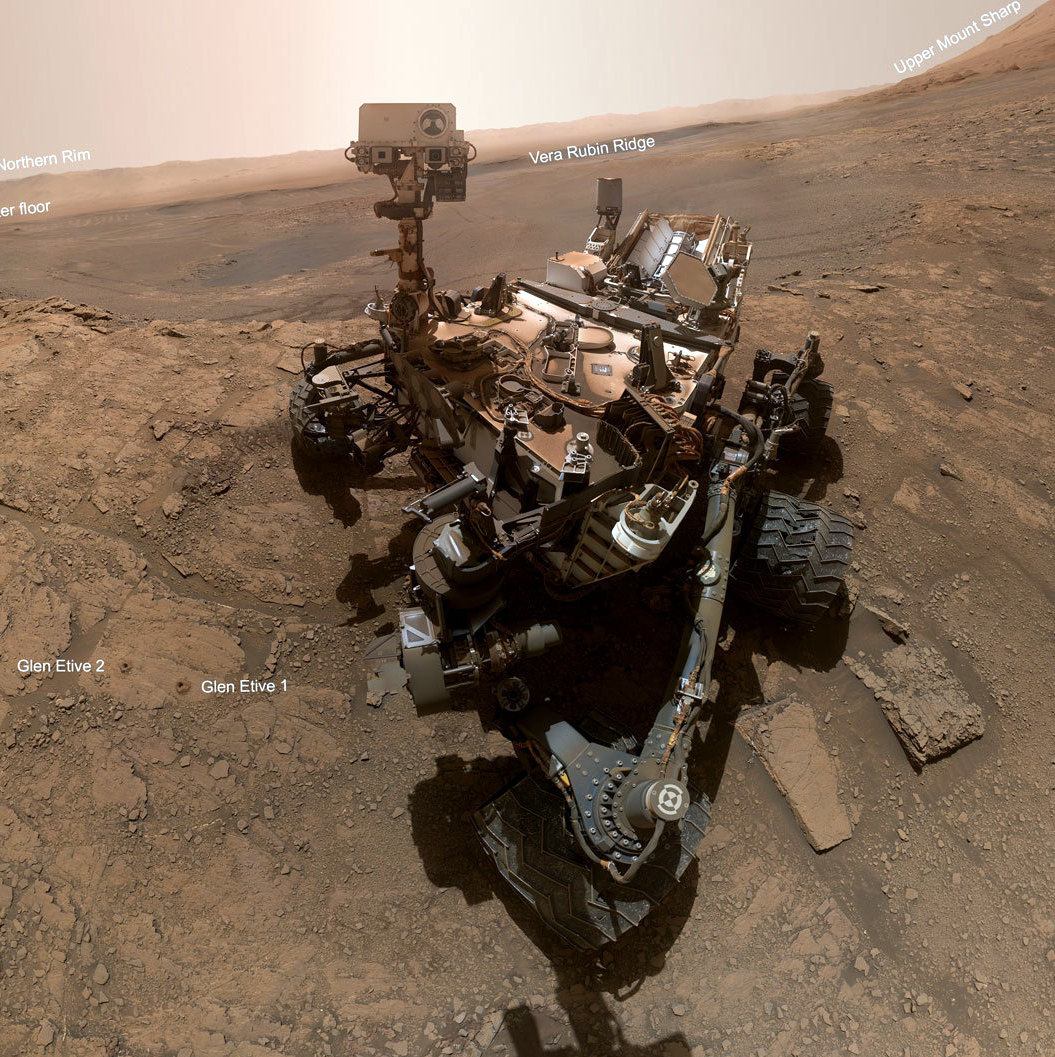 Finally a selfie of the Mars chemist itself!

This selfie was taken on the 2,553rd Martian day in a location named as “Glen Etive”. About 300 meters behind the rover is Vera Rubin Ridge – the one we discussed about in the first image. Beyond the ridge, you can see the floor of Gale Crater.

The individual images in this selfie were taken by the Mars Hand Lens Imager (MAHLI), a camera on the end of the rover's robotic arm. The images are stitched together into a panorama; the robotic arm isn't visible in the parts of the images used in the composite.

The quest for understanding the evolution of our Solar System continues and we are yet to address a large number of questions for which we are yet to get answers for. Hopefully Mars Curiosity will provide some of those answers but there is still much to learn about what lies above us on Mars, the fourth planet out from the Sun.