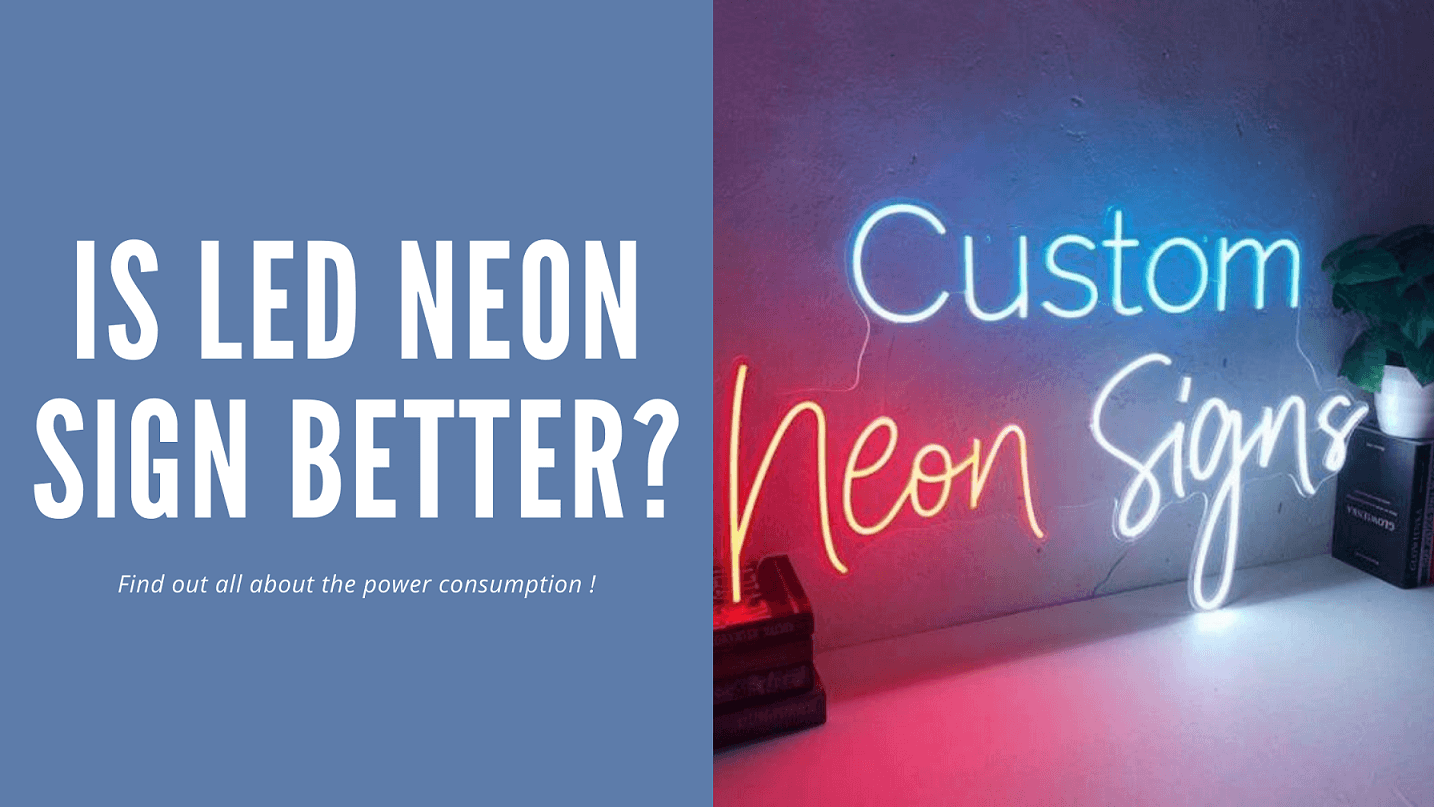 Led Neon signs are gaining popularity along with the rising sun. People are moving more towards LED signs as it is more cost-effective and free from hassle product. Find out how LED Signs are growing in popularity and why companies are moving towards LED Neon.

LED Neon signs have become the go to lightening solution as they are easy in installation, light weight and energy efficient. They come in a strip of different colour, size, types and strength featuring light-emitting diodes that can be formed into a certain shape, number or alphabet. LED Signs last for 100,000 hours which is approximately equal to more than 11 years, while the traditional neon signs have a lifespan of only 30,000 hours. There are numerous advantages of Led Signs as compared to Neon Signs, one of the most considered and discussed topic is ‘Power Consumption’.

Power Consumption at a Glance

Power Consumption is the strongest point considered while comparing between LED neon and Glass neon Signs. Neon works with very little energy consumption, it can also withstand fluctuations without flickering or going off. In simple terms a typical LED neon light consumes 1800 watts of light in a continuous use of 12 hours period while neon glass will consume 4,900 watts of light which is much of a difference between the two for same type of a lightening effect and equal period of time of usage. With this, one can simply differentiate between the two and can come to at least one conclusion that LED neon signs are more energy efficient and eco-friendly alternatives. But, there is more to learn and explore about the two, LED neon signs are more versatile in nature as they are programmable, can change colour as well as the flash. Different varieties in the sizes also help people to come up with more creative designs and ideas.

LED signs are maintenance free and they do not run out, they retain their glow and brightness just as they were on day 1. Although LED signs do not require to be replaced for 11-12 years, but whenever they are replaced it is simply a hassle free process. While neon signs get dimmer and eventually lose the gas over time resulting in the replacement of the gas by the professional manufacturer or to get a new signage. With this we somewhere know that Led neon signs turn out to be cheaper than traditional neon signs. Saving money on electricity bills is important for every business.

Let’s understand more precisely: The power usage per foot by neon tubes is of 20 watts while LED consumes just 1.2 watts of electricity. This is a huge difference between the two. For example, if the signs are being used for 12 hours per day which will result in the consumption of 19,200 watts and 1,152 watts of the electricity and for one year it turns out to be 7,008,000 watts of usage by Neon sign and 420,480 watts of usage by LED sign. One can derive how much extra electricity is being consumed by Neon sign as compared to LED sign. With this difference, 99% of the businesses as well as individuals will run towards LED signs as everyone wants to save money either it is cutting off business expenses or saving money through different sources.

With the benefit of saving money on electricity bills LED sign is a go to option for several other reasons as well. Limitless colour options and easy customization gives one more option to individuals to go with modern neon signs. This is the feature which comes while choosing between the two but once the person has decided to go with LED he/she is on the safer side as many other benefits are on the way, like Low Cost Maintenance, Safety, Appealing Sight, Easy Installation and Handling, Longevity, Environment Friendly, and the most important of all Low Power Consumption.

LED neon signs are eye catching and appealing creative signage. They are the brighter future for ventures, manufacturers of the signs as well as for the individuals. When the advertising media is touching the sky in terms of costs, then LED signs are the life savers for businesses who seek to cut costs on advertising without even compromising on appeal and versatility. LED light is not just a solution to cost cutting rather it is also environment friendly.