How does a Jet Engine Works?

If today’s modern aviation is successful, then it’s mainly due to the advancement of technology of the jet engines which made the mass transportation easy. First developed in the late 1930s and early 1940s for military use during the world war two after which the passenger aircraft revolution took place.

Even though they are many different types of aircraft engines available but we shall restrict our discussions to turbofan engines. It’s called turbofan because it has a turbine and a fan.

So let’s find out how this marvelous feat of engineering works.

The whole process can be divided into 3 different parts and lets find out how exactly a jet engine work:

In flow of air

The huge fan in front of the engine also known as the intake is the main part of a turbofan. Just like any other ordinary desk fan, this too sucks in the air and delivers it on the other side a high speed. It consists about 20 or more blades which can vary depending on the model. Most of the modern day jet engines generate about 90% of the thrust. The other 10% comes from the remaining process which we shall learn about.

The incoming air is then funneled into a compressor. The air is made to pass through many spinning disks consisting of smaller blades along a tube which gets smaller and smaller. This compresses the air quickly, making it much denser, high in temperature and explosive when fuel is added.

During combustion of the air, it generates a massive amount of pressure that needs to find a way out. This high pressure air is released at the other end of the engine which consists of spinning disks bristling with blades which are spun by the expanding gas which is known as turbine. At the end of the turbine the air leaves at high speed exerting a force on the engine on the opposite direction which is known as thrust. 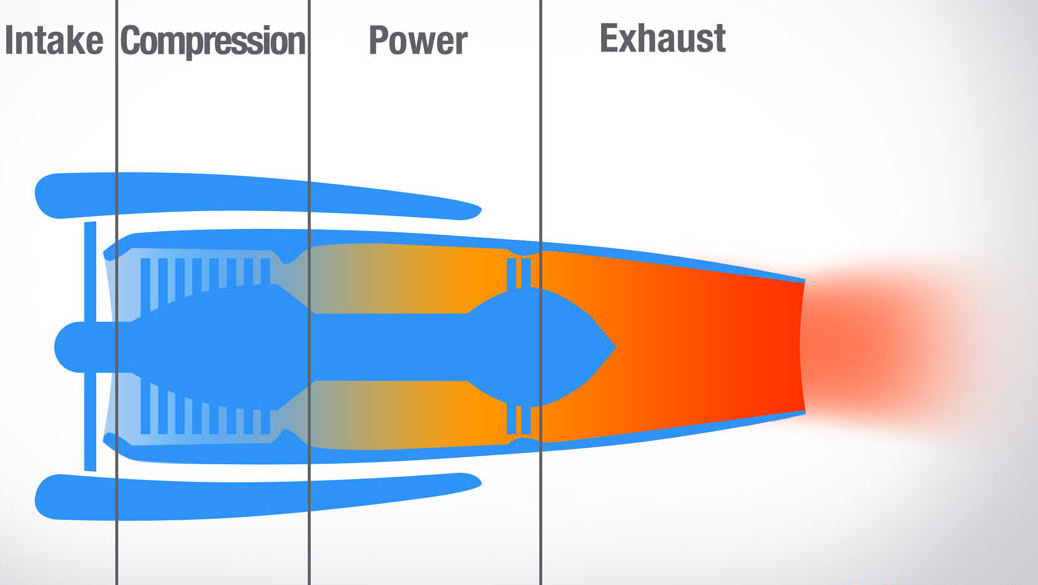 The most interesting part of the working of jet engines is that the intake fan, compressor, combustion chamber and turbine are linked by a single shaft running along the inside of the engine. So when the air leaves the turbine at high speed it helps to spin the fan in the front and thus helps to keep the process going producing more thrust. And that's how a jet engine work